Home > News > An Interview with Simon Bishop
Back to all news 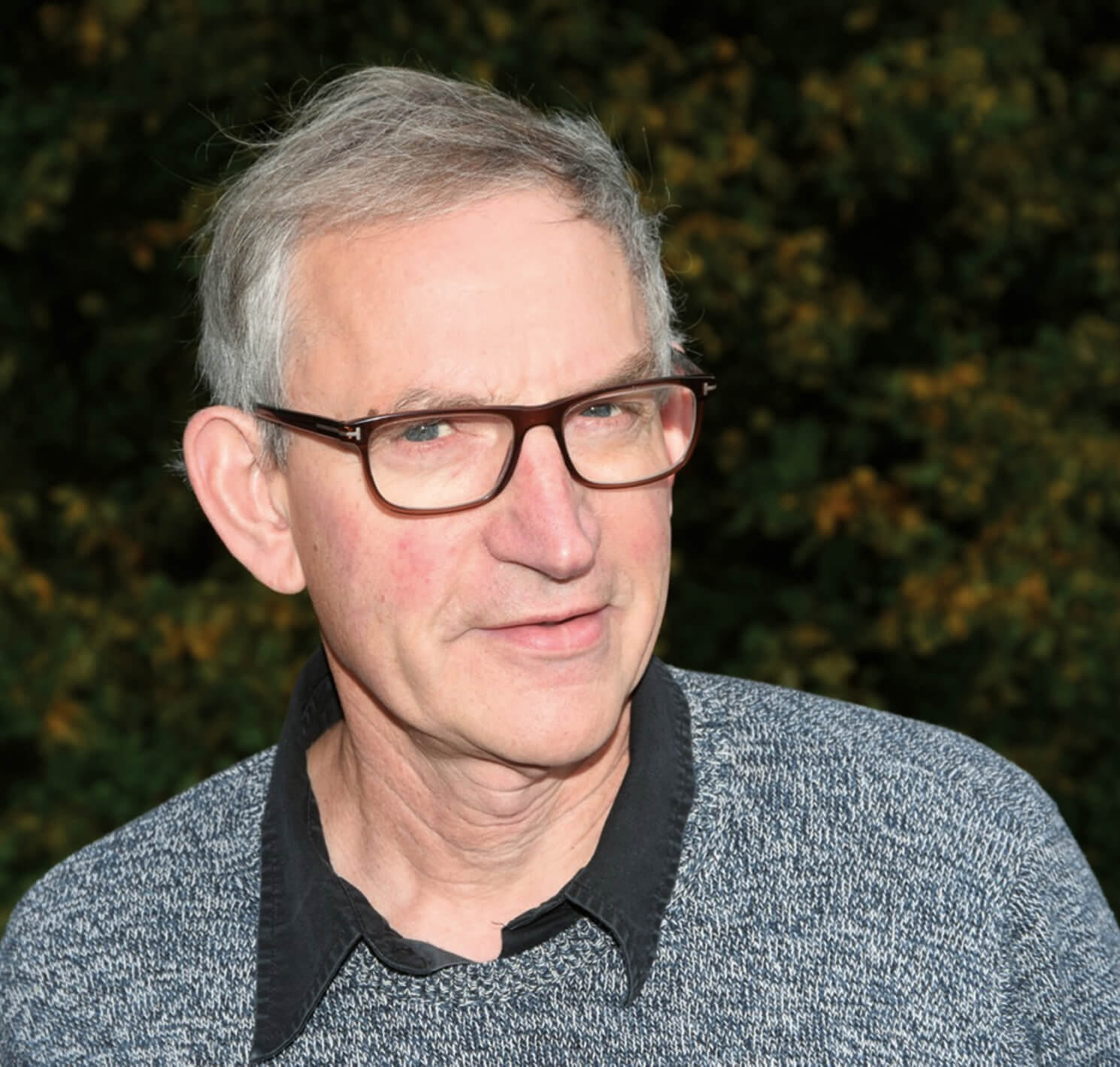 An Interview with Simon Bishop

I cannot claim to have inherited all communications from Paul! There was, after all, a very busy OPC office based in a Portakabin near the front entrance to the main School building at that time.

I originally got in touch with the office to offer my design services, having recently turned freelance after a long career with the BBC as an art editor/director. My timing was spot on it seemed as the services of the previous design agency had been recently terminated and a replacement urgently sought. I won the pitch – no doubt being an OP helped! What I had not bargained for was also being asked if I would consider taking on the editorship of the magazine as well as its design duties as Paul had moved to France. I was then somewhat daunted to find I had precisely 10 weeks to create an entire issue out of thin air as well as redesign the Old Pauline News and The Pauline. I dined out on adrenalin for the next few weeks! But I was greatly helped in my early days by former High Master Stephen Baldock and former history teacher David Bussey as well as by the OPC staff, particularly Maria Ketley and later Ceri Jones and Viera Ghods, who were all very supportive.

How did editing the Old Pauline News (now Atrium), in which you had a personal interest, differ from other publications that have come across your desk in the course of your professional career?

A lot of freedom and support to explore my own ideas.

What were your aims for the OP publications when you set out as Editor?

To include as wide a range of OPs as possible. I wanted to explore the experiences of those with more unusual careers, especially in the arts, and anyone willing to share experiences that could be of interest to current boys and Club members. Whereas Paul had built up a wide network of contacts, I found myself relying more on contacting OPs for profile-type interviews. I’m particularly glad that more contributors are now writing for the magazine so that ‘voice’ of the publication is now more varied.

What has been the most enjoyable aspect of your editorship?

Without any doubt, the opportunity it gave me to have long and fascinating conversations with OPs of various backgrounds and occupations. Puppetiers, government ministers, Nobel prize-winning scientists, DJ’s, composers, entrepreneurs, surgeons, judges, diplomats, artists and writers, all these and more have been fascinating to talk to one-to-one. Producing the Quincentenary magazine for the School’s 500th anniversary in 2009 was a career highlight.

Have you felt the need to change the content and/or style of Old Pauline communications in the course of the past eleven years?

For the magazine, I was concerned that too many similar-length OP profiles might become tired as a format and I was keen to add other editorial elements to make the magazine work on different levels. I introduced sections that would allow more direct comment by individuals such as the Conversation With, Last Word and Et Cetera columns. OP London I thought could be a great way to unlock secret watering holes in the capital, while a regular look back to our archives would keep OPs from different eras engaged. I always liked to include a lot of direct quotes in interviews to allow the individual’s character to shine through.

What is your main piece of advice to Jeremy Withers Green (1975-80) as he takes over, as well as to aspiring future editors?

Enjoy it!  Old Paulines are interesting people to talk to. Deadlines might cause the occasional concern and chasing late copy can be frustrating, but to stand at the crossroads of so many interesting and talented lives has been both a privilege and a pleasure. If you hold little interest in people you are in the wrong game. As well as producing a magazine, the editor can play a key role reconnecting OPs to the School. It has been my experience that most OPs, when asked, are more than happy to return to St Paul’s to talk about their experiences – a valuable resource for boys wishing to learn more about prospective careers, or simply life itself. 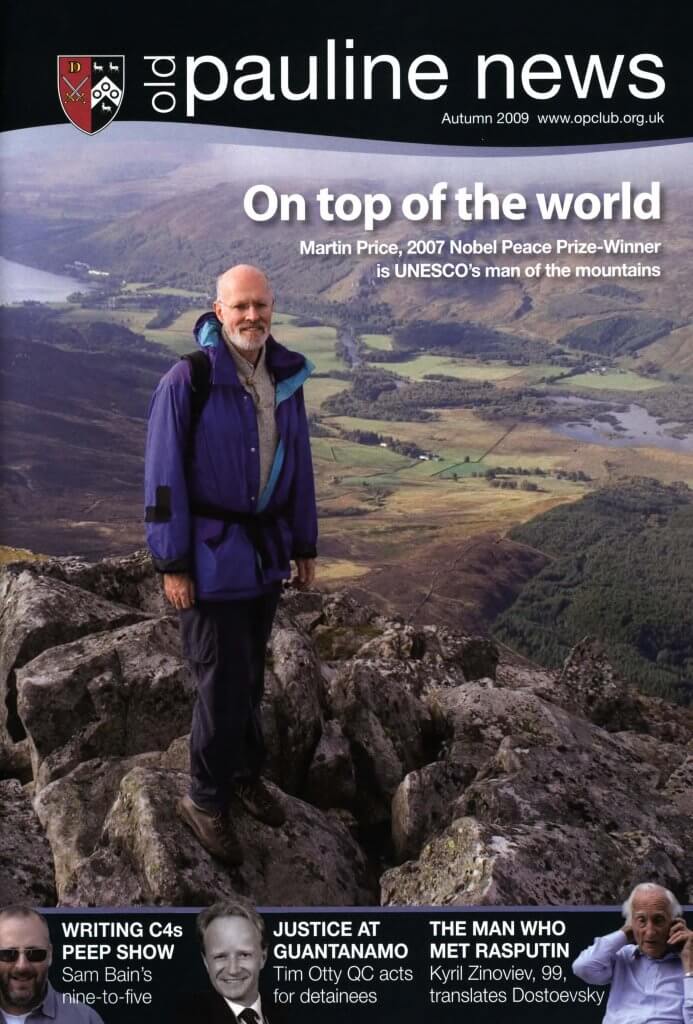 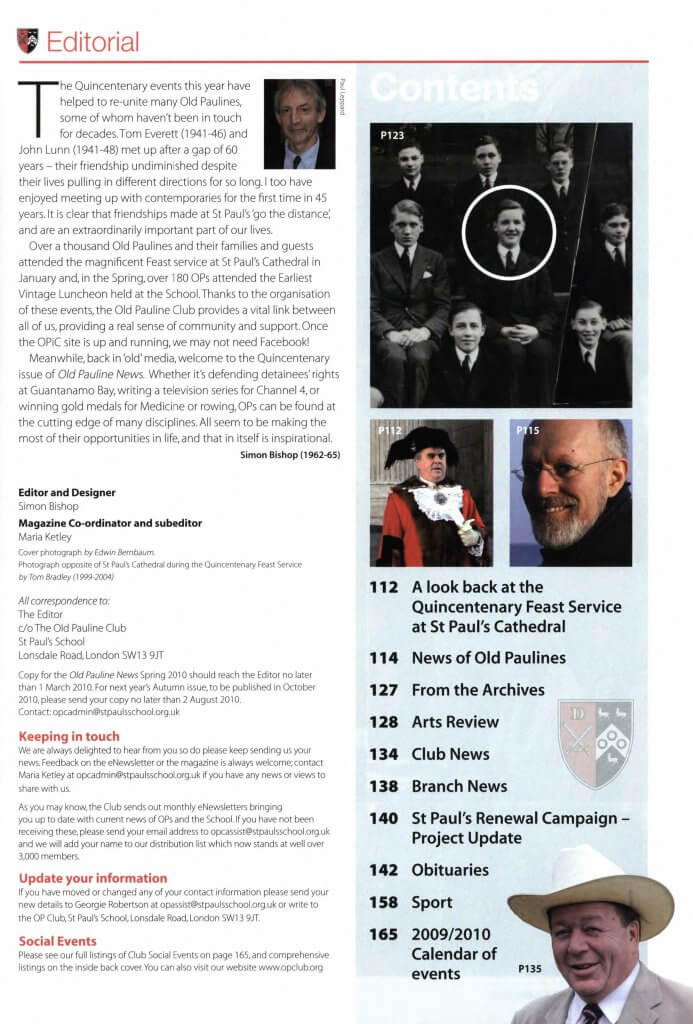 The cover and Editorial of the Autumn 2009 Old Pauline News, Simon Bishop’s first issue as Editor. 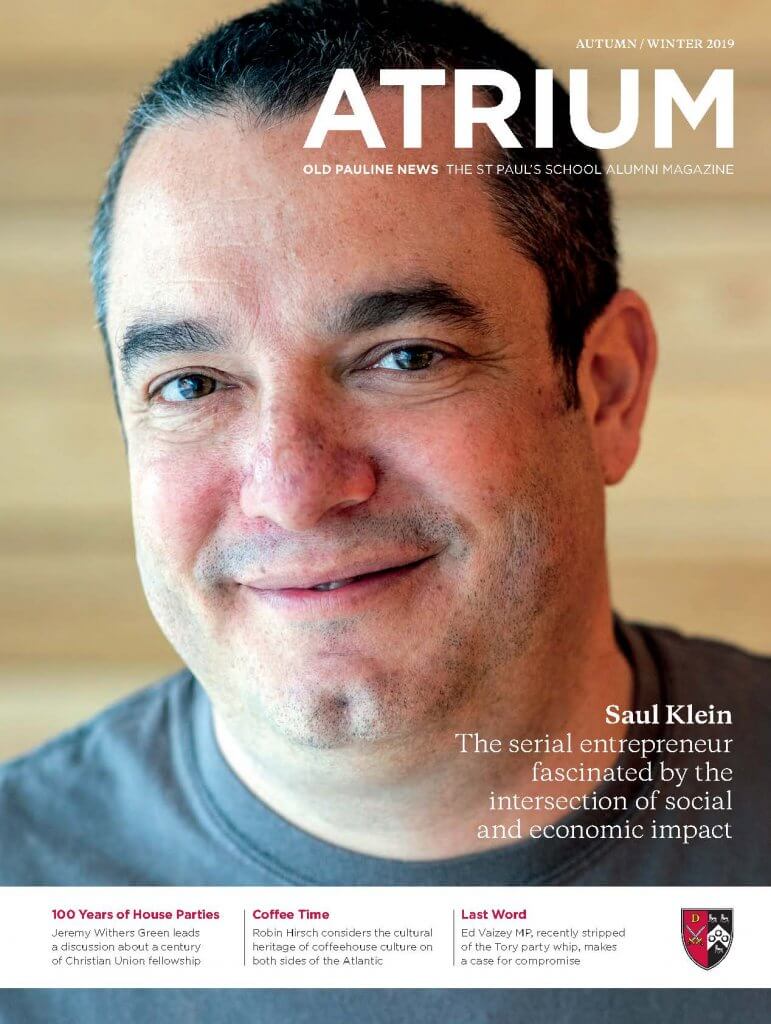 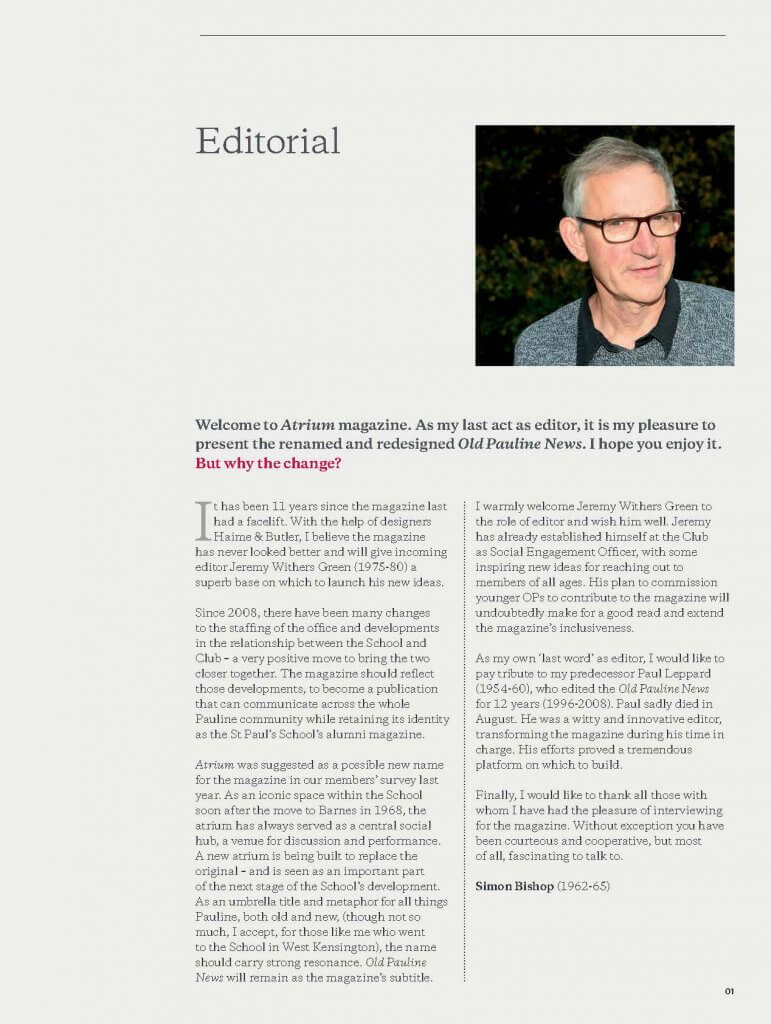 The cover and Editorial of the Autumn/Winter 2019 Atrium, Simon Bishop’s final  issue as Editor.