Please find on these pages obituaries of Old Paulines and former St Paul’s Staff who have recently passed away. 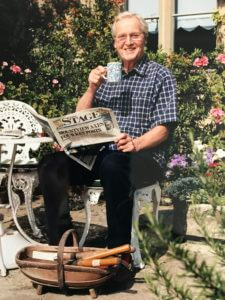 Nicholas Parsons was born in 1923 in Grantham, Lincolnshire.

He attended St Paul’s School with his elder brother John, where he was very happy.

He mentions in his book ‘My Life in Comedy’, he performed well academically but especially enjoyed the games and was awarded his colours for Rugby and Cricket.

He also took part in school plays which helped foster his love of acting and performing.

He wanted to be an actor from a young age and his nickname at St Pauls was “Shirley” because the big star at the time was Shirley Temple.  It began to dawn on his parents that he was serious about acting and fearing a life of alcoholism and penury, they packed him off to Clydebank to become an apprentice in a shipyard.  It was a make or break situation and he survived by doing impressions and making people laugh. Determined, however to become a performer, he started moonlighting and gradually found his feet acting with local repertory companies.

He came to London and obtained acting work in the West End and Bromley Rep and worked consistently in cabaret at Café de Paris and Quaglino’s. He became resident comedian at the Windmill Theatre and with his talent for mimicry, he soon joined the BBC Radio Rep which is where he met his first wife Denise Bryer, also a brilliant mimic.

He appeared in many TV programmes of the 50s and 60s, and was for ten years the straight man in “The Arthur Haynes Show”, as well as presenting the hugely popular game show “Sale of the Century”.  But in 1967 he found the radio role that would last a lifetime, hosting “Just a Minute”, where his years of playing the straight man made him the perfect foil for the contrasting comedy talents.

Workaholic that he was, Nicholas continued to combine his TV and radio commitments with a varied stage career, fully supported by his second wife Annie.

This included many comedies, musicals and pantomimes in the west end.  He also wrote and appeared in his one man show, which he performed well into his 90s.

In the 80s he became rector at St Andrews University and performed as the narrator in the UK premier of “Into the Woods” and in the 90s appeared in the West End revival of “The Rocky Horror Picture Show” for which he donned fishnet tights and high heels.

Nicholas was a consummate professional and an extremely generous performer.  For many years, until aged 95, he made his annual pilgrimage to Edinburgh festival where he extended this generosity of spirit by hosting his informal chat show and introducing fresh comedy talent to the circuit.

In 2004 he was awarded an OBE for services to drama and broadcasting, and in 2014 he was appointed CBE for his charitable work, to which he dedicated so much of his time.

At the age of 93 he celebrated 50 years of hosting “Just a minute” and was proud that he had never missed recording a episode, quite an achievement.

Nicholas died on 28 January 2020 aged 96 following a short illness, and is survived by his wife Annie, and his two children, Suzy and Justin, from his first wife Denise.  He is much missed by his wife, children, grandchildren and extended family.

Written by: The Parsons Family

Ninian Stephen spent his boyhood in Europe and the UK, attending St Paul’s in 1937-38, before emigrating to Australia in early 1940 with his Scottish mother, Barbara Stephen (nee Cruickshank) and Australian guardian, Nina Mylne.

His days at St Paul’s followed years at George Watson’s College and the Edinburgh Academy, and were followed by Chillon College (Switzerland) and Scotch College (Melbourne, Australia). It was a peripatetic early life, shaped by two women with strong aspirations for his education and happiness, and also by international affairs. His parents’ WWI marriage did not survive peacetime. Ninian never met his father, and the outbreak of WWII took him to Australia. He embraced, and was formed by, that new world: as part of the Australian Infantry Force (1942-46), posted in the Australian Outback and New Guinea; by his long and loving marriage to Valery (nee Sinclair); and by his career as barrister and judge (Supreme Court of Victoria 1970-72, High Court of Australia 1972-82) and as Governor-General of Australia (1982-1989).

During his time as Governor-General, he and Valery met thousands of Australians. They travelled widely in remote Australia, the Torres Strait Islands and the Pacific, welcomed distinguished visitors to Australia’s Bicentenary celebrations (1988), and met regularly with Queen Elizabeth. In 1985, he effected the formal transfer of Ayers Rock (now known as Uluru) to its traditional owners, and described its significance: “To those of us who live far away, in the cities strung out along our continent’s sweep of coastline in a great arc around ‘the Rock’, it beckons insistently – drawing us inland to discover and learn to understand the vastness of our land. … For many Aboriginal people, this place has still deeper meaning and deep spiritual significance, a significance whose roots go back to time immemorial. And now, today, the Uluru-Katatjuta Aboriginal land trust becomes the custodian of this heartland of Australia.”

For a further 15 years, Ninian Stephen worked across the globe on conflict resolution – as judge, diplomat, advocate and conciliator – for the UN, the ILO, the Commonwealth of Nations, and the Australian and British governments.

As Australia’s Ambassador for the Environment he advocated on climate change and the mining ban in Antarctica; as a founding judge of the International Criminal Tribunal for the Former Yugoslavia, he sat on the first of this generation of war crimes prosecutions and played a leading role in drafting new rules and procedures; and as chair, he steered the 1992 power-sharing talks in Belfast between rival Catholic and Protestant officials. He also advised on South Africa’s constitution; investigated forced labour in Burma; mediated between government and opposition in Bangladesh; and helped to set up a tribunal on the Khmer Rouge atrocities.

Ninian Stephen received a Knighthood in the Order of the Garter in 1994. At this death, the Australian Prime Minister, Malcolm Turnbull noted: “Australia will remember Sir Ninian for his humility, his intellect, and his lifelong commitment to justice and the rule of law.” Gareth Evans (Australian Foreign Minister 1988-96) said of him: “No Australian in living memory was more widely admired and respected, both here and internationally.”