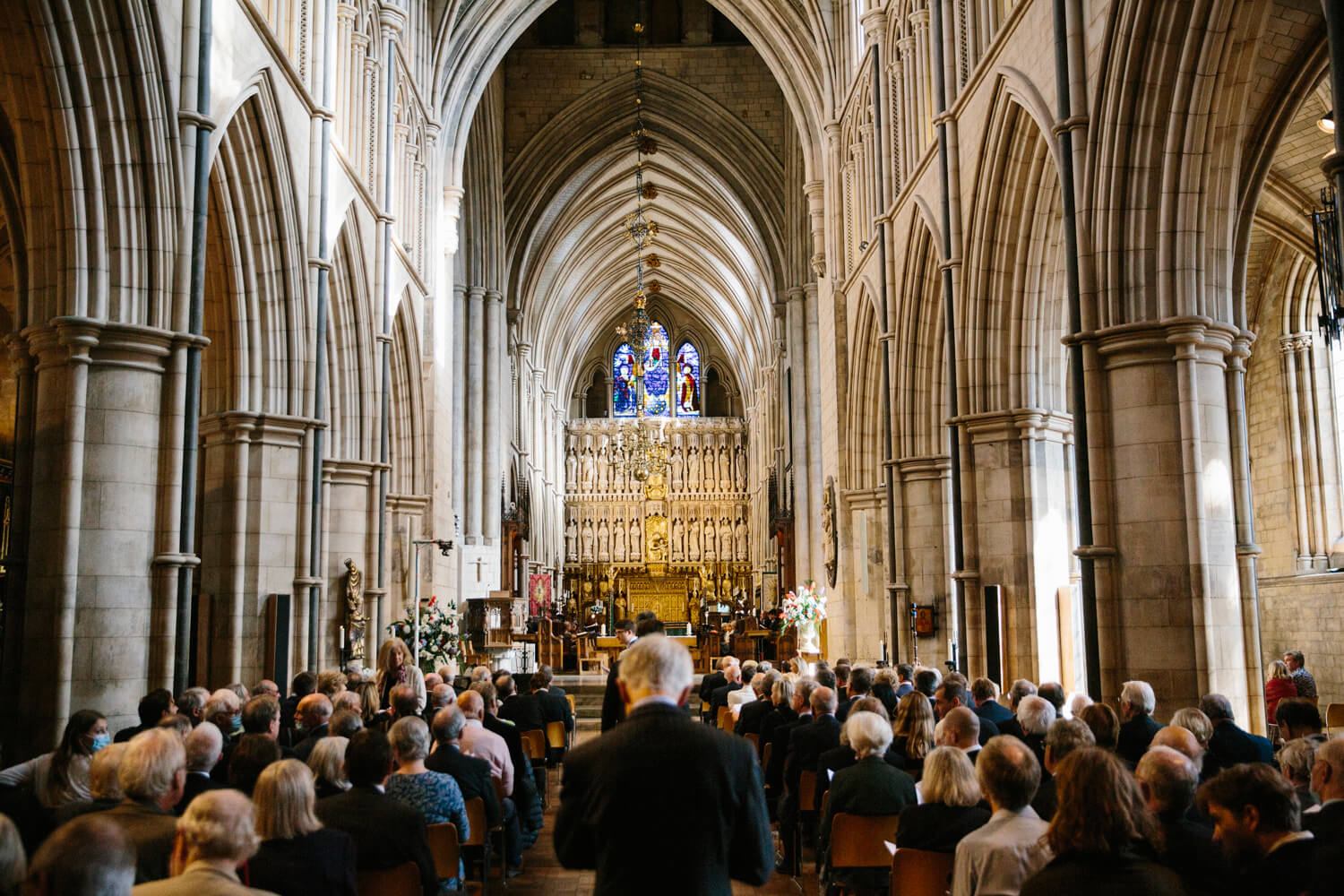 Basil Moss died in December 2020 and his funeral took place at St Michael and All Angels Church in Barnes. Covid restrictions at the time meant that only 30 people could attend, but even had that not been the case, it was always inevitable that a larger event would be needed once rules allowed. So, in September, more than 500 people filled Southwark Cathedral for a service of thanksgiving for Basil’s life, led by the cathedral’s Canon Precentor, the Revd Canon Andrew Zihni.

The tributes to Basil reflected the many facets of his life of service.

Giordano Orsini worked alongside Basil for many years at Colets, the health and fitness club with strong links to the Old Pauline Club. Basil helped found Colets in the 1970s, and ran it for more than 40 years. According to Giordano, Basil’s time there was characterised by his boundless energy and ambition. Still, said Giordano, it was not what Basil did that was so impressive, but why he did it – his love and compassion for all.

Basil’s career as an actor was one of the themes of the tribute by his friend and occasional co-star, Marcia Warren. Marcia’s own filming commitments – playing the Queen Mother in the next series of The Crown – meant that she was unable to attend and her words were read by Basil’s friend Jane Sherwin.

Marcia recalled how Basil, a “life-enhancing, extraordinarily kind, wise, loyal, gentle polymath”, was not immune to less elevated character traits. He once forced the curtain to be brought down early on a production of The Barretts of Wimpole Street when he and fellow cast member Bridget Turner were rendered incapable by a fit of the giggles.

Marcia also told how Basil, still working regularly as an actor, was once seated at an OP dinner next to Sir Richard Eyre, who was then head of the National Theatre. Basil began by politely asking Sir Richard what he did for a living, and then, mortified at not having recognised him, spent the rest of the evening desperately avoiding having to reveal his own profession.

In a sense, that story epitomised how Basil never let his many talents and successes get in the way of what he always considered to be the important things in life.

As Andrew Puddifoot (1974-79) said in his own tribute to Basil: “in Bas’s world, self was a distraction – a distraction from the things that really mattered, like other people, music, not wasting time, the spiritual dimension, love.”

Andrew spoke movingly of the overwhelming importance to Basil of his Christian faith. As well as being a profoundly spiritual person, one of Basil’s many gifts was his ability to communicate and embody the love of God through his own actions. One of the ways he achieved this, said Andrew, was through his life-long role leading the Pauline Meetings and St Paul’s School Christian Union. There were also many individual acts of love and selflessness shown to those around him.

Basil’s passion for music was represented by extracts from Wagner’s Die Meistersinger von Nurnberg and Elgar’s Nimrod both played by organist Stephen Disley. Adam O’Taylor (1999-2004) and Peter Teverson (2005-10) performed Somewhere from West Side Story, and Basil’s very own setting of the Kyrie and the Gloria was sung by the choir of St Michael’s and All Angels, Barnes, under Tony Henwood’s direction.

The memorial reminded all who were there of why they were thankful to have known Basil. So did the many jokes and stories – many at Basil’s expense – which were shared at the Glaziers’ Hall afterwards, and late into the night in the various pubs and bars of Southwark.

To quote again the words of Richard Cunis’ splendid tribute: “Basil did indeed make a good living from what he got. And he made and enjoyed a long, rich and full life by what he gave to so many others.”