Home > News > Compton Mackenzie
Back to all news 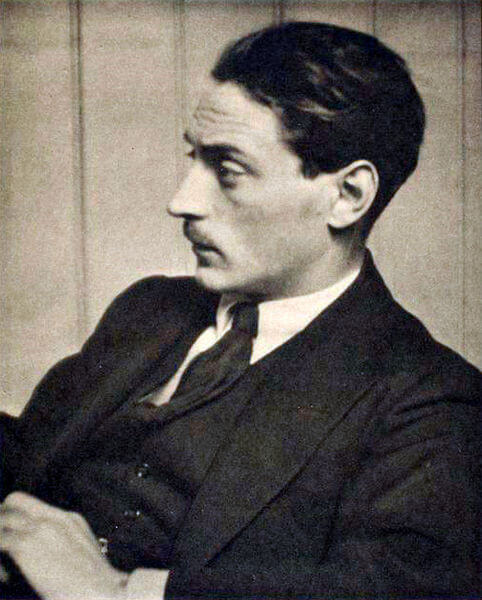 Sir Edward Montague Compton Mackenzie (1894-1900) lived a very long life of 90 years. He needed to; he needed the time to write (or rather have published) 113 titles including a Scottish historical odyssey of almost a million words and an autobiography that runs to ten volumes.

Compton (or Monty) was born in Hartlepool into a theatrical family with Scottish roots. He is listed in The Pauline, March 1895 as one of the junior scholars elected on to the Foundation in the Lent Term of 1895. Subsequent editions describe ‘E.M. Compton-Mackenzie’ in the cast of a short apposition play, competing at athletics and donating books to the ‘Boys’ Library’. He is included amongst the names admitted to the Old Pauline Club on 23 June 1900. His time at School is thinly disguised in his third novel Sinister Street (1913). St Paul’s is St James’. High Master Walker is Dr Brownjohn. Mr Elam is the eccentric Mr Neech. It caused a stir. Henry James thought it to be the most remarkable book written by a young author in his lifetime. The novelist Ford Madox Ford enigmatically described Sinister Street as ‘possibly a work of real genius’ while Eton’s headmaster wrote to The Times outraged by its allusions to teenage sexual urges.

During the First World War Mackenzie served with British Intelligence as a spy in the Mediterranean, later and inevitably publishing four books about his experiences. He loved it ‘as a boy enjoys playing pirates’; his greatest adventure and triumph as ‘Director, Aegean Intelligence Service’ was the recapture of the Cyclades Islands. After the publication of his Greek Memories in 1932, he was prosecuted under the Official Secrets Act for quoting from supposedly secret documents. His account of the trial is described in Octave Seven (1931–38) of his autobiography: the result was a fine of £100 and prosecution costs of the same.

It is in the 1920s that Mackenzie went to live with his wife, Faith on Capri, which was known to be tolerant not just of foreigners in general, but of artists and homosexuals in particular. His observations on the local life of the Italian islanders and foreign residents led to two novels, Vestal Fire (1927) and Extraordinary Women (1928). The latter is a roman à clef about a group of lesbians arriving on the island of Sirene, a fictional version of Capri.

The first of Mackenzie’s truly enduring works, Monarch of the Glen was published in 1941 and the TV series it inspired were enormously successful. At times they are some way removed from the spirit of the original book, which satirised the anglicisation of Scottish nobility and had a distinctly nationalist edge. Mackenzie was a founding member of the SNP.

His most famous book is probably Whisky Galore, published in 1947 and turned into a classic film. It fictionalises real events that had taken place in 1941 when a cargo vessel bound for the United States with a load including 28,000 cases of scotch whisky had run aground on Eriskay; an island visible from Mackenzie’s then Barra home.

It is Mackenzie’s extraordinary productivity and versatility that astonishes. Apart from the novels, he wrote history on the Battle of Marathon and the Battle of Salamis, biography (Mr Roosevelt, a 1943 biography of FDR), literary criticism, satires, apologia (Sublime Tobacco 1957), children’s stories and poetry. Away from writing, he was president of the Croquet Association and the Siamese Cat Club. He and his brother-in law Christopher Stone founded Gramophone, the still-influential classical music magazine. He is even believed to have presented the Snooker World Championship Trophy to Joe Davis.

And anyone with that dog and those knees deserves to be Pauline of the 20th Century. 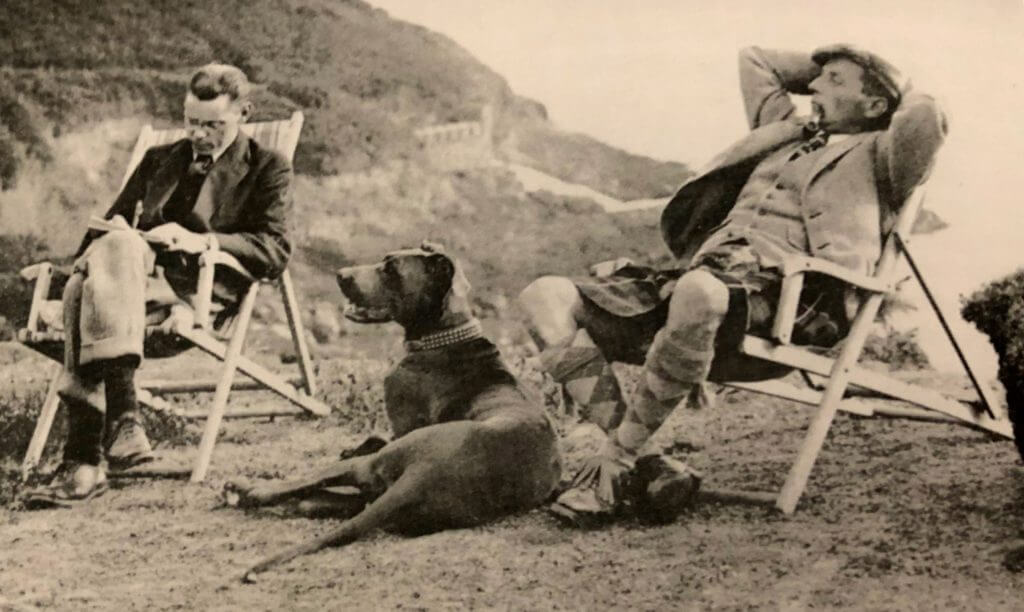 Compton Mackenzie like Tubby Clayton (May’s candidate) ticks the ‘national treasure’ box with appearances on ‘This is Your Life’ and ‘Desert Island Discs’. Here are his record choices and it is a no nonsense list. His luxuries of course were props through much of his great life.

(interestingly, the obituary immediately follows that of Philip ‘Tubby’ Clayton, the subject of last month’s newsletter)

COMPTON MACKENZIE. Our last issue carried a short notice of Sir Edward Compton Mackenzie’s death on November 30th, 1972, at the age of 89. The following notice is reprinted from The Times. Edward Montague Compton Mackenzie was born on January 17, 1883, at West Hartlepool (where his parents were on tour), the eldest son of Edward Compton, the actor/ manager, and his American wife, Virginia Bateman, daughter of another stalwart Victorian man of the theatre, Hezekiah Linthicum Bateman, who launched Irving at the Lyceum. His paternal grandfather, Charles Mackenzie, had taken the stage name of Henry Compton. This family background brought him into contact, while still a preparatory schoolboy, with many stage and literary celebrities. Educated at St. Paul’s, he disappointed his High Master, the great Dr. Walker, who saw in him a Balliol classical scholar, by preferring to go up to Magdalen as a commoner and reading History. The atmosphere of late Victorian and Edwardian London and Oxford was exquisitely caught in his early novels Carnival and Sinister Street; in them he showed himself a master of Cockney idiom and humour. They had been preceded by some pleasant conventional poetry and a first novel The Passionate Elopement, a graceful eighteenth century pastiche for which he had much difficulty in finding a publisher, until Martin Secker came to the rescue. During the 1914-18 War he served on Ian Hamilton’s staff in the Royal Marines at Gallipoli, and then as an intelligence officer in the Aegean. These experiences were used in a series of novels and memoirs, including Greek Memories, which led him to be prosecuted under the Official Secrets Act. He hit back at what he regarded as a frivolous and spiteful action in Water on the Brain, satirizing the Secret Service. The offending Greek Memories was accident-prone in encounters with the law; having sold the copyright of his first twenty books for £10,000 in 1943, believing this would be a capital transaction, he had to pay income tax in the year of sale. His output of novels never stopped; Guy and Pauline (1915), Sylvia Scarlett (1918), and Sylvia and Michael (1919) were linked with those of his school and Oxford days. During the twenties and thirties he poured out light comedy, including Poor Relations and Rich Relatives and Vestal Fire and Extraordinary Women in which he revealed a humorous, sympathetic understanding of male homosexuals and Lesbians, which was considerably in advance of the times. His absorption in questions of faith and ritual, dating from school days, went into a trilogy on clerical life beginning with The Altar Steps. As in so much of his work, these were partly autobiographical, and helped to show how he followed the path to conversion, in the spring of 1914, to the Roman Catholic Church. Between 1937 and 1945 he produced The Four Winds of Love in which he spread himself, again to some extent autobiographically. By then, he was deeply committed to Scottish Nationalism, and had found a home in the Hebridean island of Barra, where he commanded the war-time Home Guard. Scotland gave him material for exploiting his genius for high spirited fun in, among others, Whisky Galore and Monarch of the Glen. Novels did not exhaust his powers. The Abdication brought him into the ring with The Windsor Tapestry. He did biographical sketches of Roosevelt, Benes, Pericles and Prince Charlie. At the end of the war he visited the battlefields in India as a guest of the Indian Government, and described it in Eastern Epic. In 1963 he brought out “Octave I” of My Life and Times and thereafter new volumes appeared each year until 1971 which saw the publication of Octave Ten. Here that microscopic memory, helped by the hoarding of letters, served to make this a unique tour de force; no detail, no small change had got through the net from earliest childhood. The tabby cat which, at two, impressed him as “large as a lion” was by no means his first memory. Although he had been so closely linked from the start with the theatrical world, he never succeeded as a dramatist on a scale at all comparable to his achievements in other kinds of writing. He made a few appearances on the stage and might have had a career as an actor. But he preferred authorship. Soon after coming down from Oxford, he made some gay contributions to the lighter stage and was associated with that most famous of troupers, Pelissier of ‘the Follies who married his sister, Fay. His plays included The Gentleman in Grey, Carnival, Columbine and The Lost Cause. As an amateur, he once played Hamlet at Fowey in Cornwall under the auspices of “Q”, Sir Arthur Quiller-Couch, the novelist and Cambridge Professor of English Literature, who was among his most enthusiastic early admirers. His connoisseurship embraced music (he edited The Gramophone), gardening, the collecting of islands and the cultivation by day and night of the art of good talk; to have heard him, Max Beerbohm and Ronald Knox reminiscing together was a delight never to be forgotten. His friends of both sexes were drawn from all classes and many countries. Passionately though he identified himself with places, he had a restless temperament and would turn his back without regret from a beloved spot where he had grown roots. For years the London he had known so well and with such deep affection scarcely saw him except in brief visits to the Savile Club. He divided his time in old age between Edinburgh and Pradelles, Les Argues, Lot, the French house which he found so conducive to recollecting times past. Many honours and distinctions came his way. He was Rector of Glasgow University in the 1930s; Governor-General of the Royal Stuart Society; an honorary LLD of Glasgow; a C.Lit of the Royal Society of Literature; and a former president of the Croquet Association.

The ride covers the entire coastline of England, Scotland and Wales.
- more
19 June

Read the President’s Report to the OPC AGM
- more