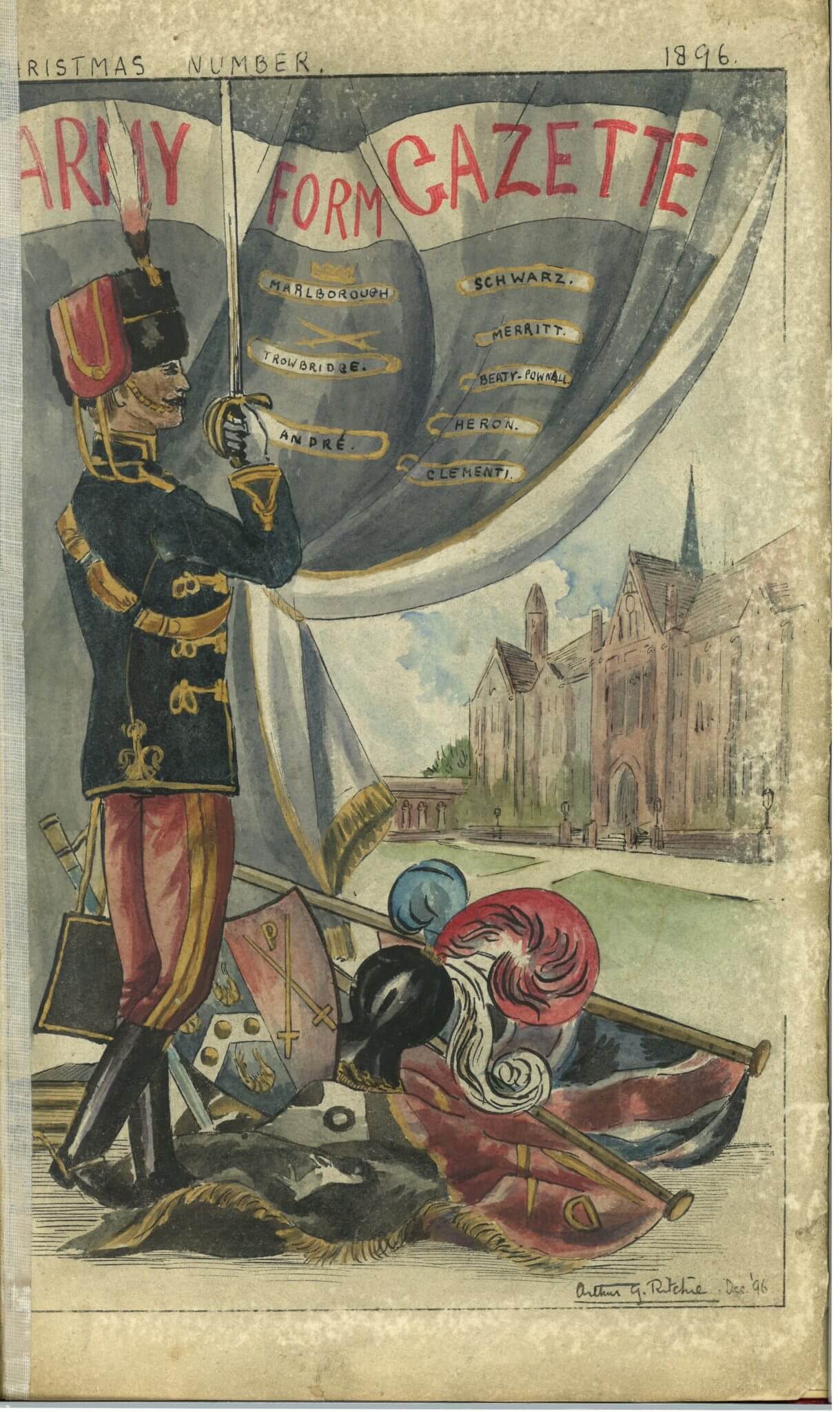 Paul Ganjou (1960-65) who is a Past Chairman of The Nelson Society provides this portrait of the name behind C Club.

After St Paul’s, Thomas Troubridge (1768-73) became one of Nelson’s ‘Band of Brothers’ (the officers who fought under him at his great battles). His close friendship with Nelson started when they both joined Seahorse as midshipmen at age 15 and only ended in 1803 when Troubridge was posted to the East Indies and Nelson began his pursuit of the French fleet leading to the Battle of Trafalgar.

In his early career, Troubridge took part in the American Revolutionary War and the Battle of Trincomalee in the Anglo-French War. He was promoted to post-captain in 1783 and was later appointed to command the third-rate Culloden. Third-rates had 64-80 guns and were the standard size warship of the day: indeed, Nelson’s favourite ship was not the first-rate Victory, but also a third-rate – Agamemnon.

Troubridge famously led the line in Culloden at the Battle of Cape St Vincent in 1797 and was commended for his courage and initiative by Admiral Sir John Jervis. Indeed, Jervis publicly considered Troubridge to be the finest officer in the service and had he been as clever at promoting his own achievements as the then Commodore Nelson, it could have been Troubridge as well as Nelson who won fame at that battle. Nelson took two Spanish ships by first, disobeying Jervis’ orders and then personally leading the boarding parties – an unprecedented feat at the time – and he made sure that everyone who mattered back home learned about it.

Later that year Troubridge assisted Nelson again, but unfortunately in a rare failure this time – the amphibious attack on Santa Cruz in Tenerife. Nelson’s plan called for a night-time landing under Troubridge’s command, but it unfortunately went wrong for various reasons, although he later brilliantly negotiated a cease-fire with the Spanish, in place of the wounded Nelson.

In August 1798, while manoeuvring into position for the attack on the French fleet, Troubridge ran aground in Culloden near the entrance to Aboukir Bay and was consequently unable to take any part in the Battle of the Nile. Troubridge at least had a grandstand view of the battle – arguably an even more complete victory than Trafalgar – and would have witnessed the great explosion of L’Orient, the French flagship where, famously, the boy stood on the burning deck. The boy was Casabianca, the son of the French Admiral.

It was in Naples, where Nelson and his fleet had repaired after the battle, that Troubridge began to fall out with Nelson, though, as he disapproved of his very public affair with Lady Emma Hamilton, the wife of Sir William Hamilton, the English Ambassador. Troubridge and Nelson were married themselves, both in 1787 and both to ladies called Frances.

Troubridge continued to serve in the Mediterranean with distinction and was created a baronet in 1799. He joined the Admiralty as First Naval Lord in 1801 and was promoted to rear-admiral in 1804. He was sent to command the eastern half of the East Indies Station in 1807, but on arrival, his area of command was changed to the Cape Station – very unfortunately for him: because on his voyage from Madras to the Cape of Good Hope, his ship Blenheim, foundered in a cyclone off Madagascar and the admiral and all hands were tragically lost.

Troubridge was an honourable, brave, dutiful, quick-tempered, excitable, single-minded and brusque man – a real British bulldog. There is a stained-glass window dedicated to him outside the High Master’s office and, as one of Nelson’s ‘Band of Brothers’, he was part of one of the finest fighting forces that England has ever produced. As such, his place in English and Pauline history is assured. 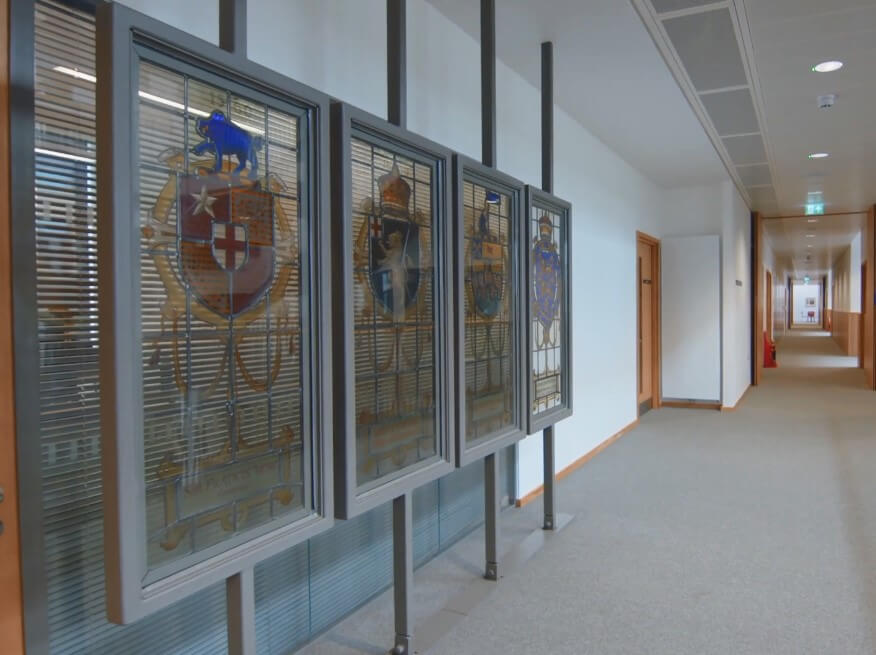 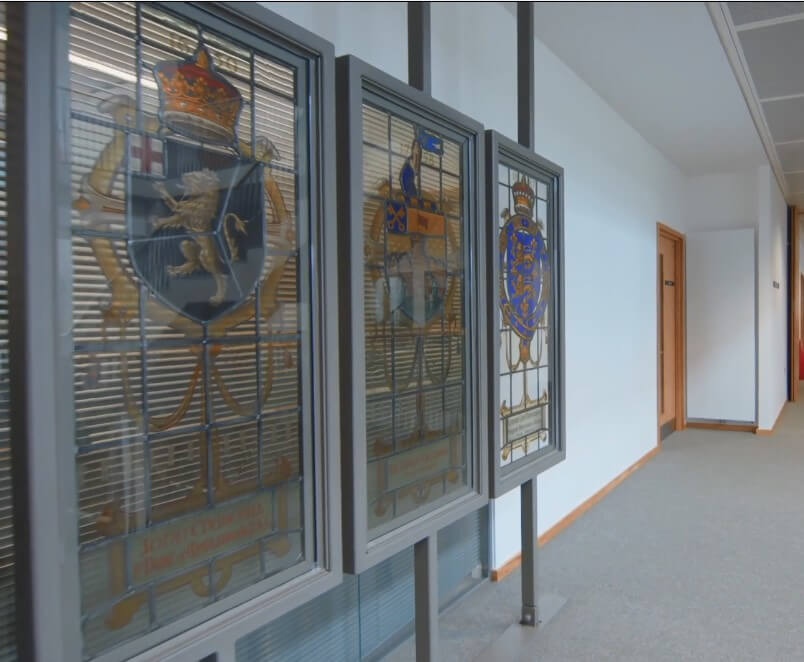 Paul Velluet (1962-67) recalls that when he was in ‘C’ Club, many at the School in the 1960s (insofar as they were aware of the names of the clubs at all,) called ‘Troubridge’  ‘Troutbridge’, which was the name of Her Majesty’s frigate, HMS Troutbridge, commanded by Commander, later, Captain ‘Thunderguts’ Povey that featured in the long-running BBC Light Programme comedy The Navy Lark. Episodes can still be heard on BBC Radio 4 Extra. 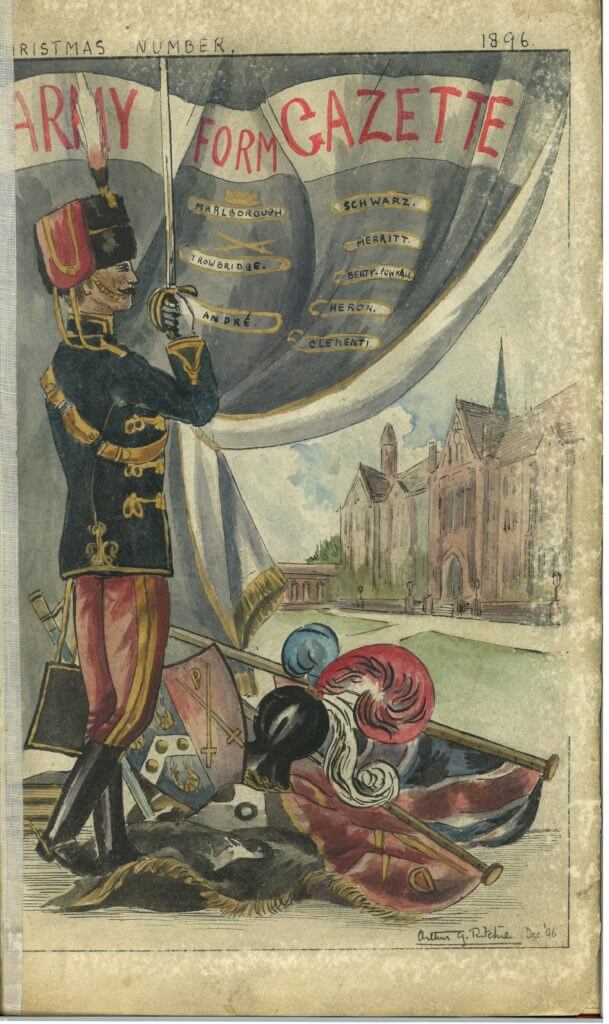 The cover of the Army Form Magazine Christmas Number 1896, kindly provided by Ginny Dawe-Woodings (Archivist). Students from the army form usually left St Paul’s for military colleges such as Woolwich and Sandhurst at the end of their time at the School. Some of the forms produced magazines, like this one. Arthur G. Ritchie (the illustrator), attended SPS 1893-1897, and won several of the art prizes before heading off to Sandhurst.