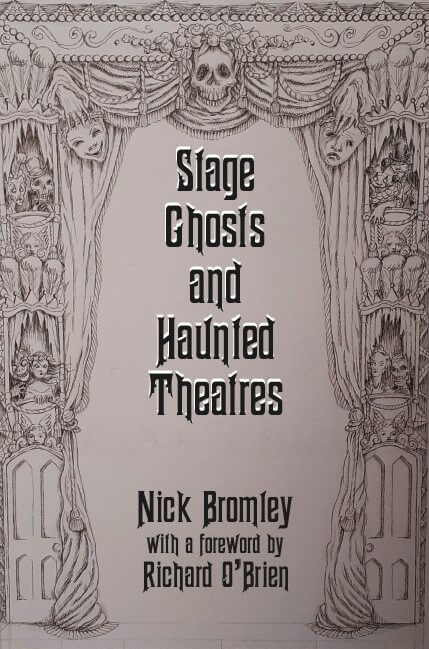 Stage Ghosts and Haunted Theatres, which was launched on National Paranormal Day 2021 (3 May), takes the reader on a selected tour of some of the British Isles’ phantom filled venues.

Our interconnection with ghosts is as old as mankind itself, for spirits of the dead have been believed, observed and recorded since the dawn of time. As a boy, a peculiar visit to the private apartments of the Palais de Versailles first encouraged Nick Bromley to seek out the possibility of their existence. Since then, personal experiences have convinced him of their presence, for his stage career has enabled him to bear witness to several fragments of the afterlife. The particular ability of theatres to retain memories and sightings of their past occupants is second to none. This has helped him over the years to assemble a collection of spectral encounters from witnesses on both sides of the curtain, be they actors, backstage workers, managers or front of house staff.

Now, fittingly introduced by Richard O’Brien, the creator of the legendary The Rocky Horror Picture Show, this book presents a new collection of untold supernatural experiences together with historic stories intertwined with the details of the individual theatres where ghosts in many forms have been encountered. Combining both personal memories of the supernatural and the background of over fifty widely different venues, this new illustrated book is an important celebration of the ghosts who haunt our theatres.

This year’s AGM marked the end of Brian’s term as the Club’s President. Here is the full text of his report to members.
- more
25 June

We are delighted to share the charming story of the Delice Saxophone Quartet.
- more
21 June